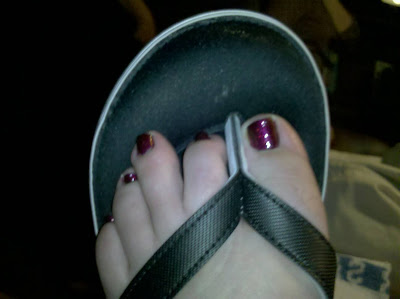 I am SUPER BUSY right now. We're buying a house, my nails are peeling off (no seriously, and it sucks), and I am just sort of swamped.

Once we get all packed and moved, I'll start blogging again. And I'll put my blogsale back up. Right now it's just too much to worry about! 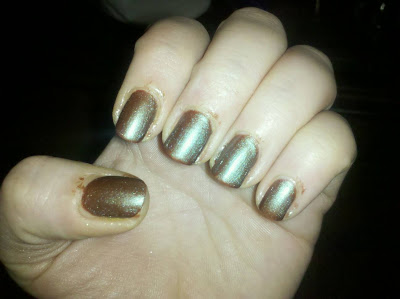 Tonight I dumped a bunch of L'Oreal HIP pigment in Intrepid into a bottle of clear polish, and this is what happened. I loooooove it! I bought a backup of this pigment for the express purpose of frankening with it, since it's currently 75% off at CVS.

Ok... so after I removed this from my nails, I tried to think of a unique way to make this polish work for me.

It's still not working for me, but at least I have a photo.

I thought that using a blue as a base would be interesting under the sheer pinky-red base of Mrs. Claus. It sort of is, but I'm still not feeling it.

I used one coat of Orly Snowcone (best. medium blue. ever.) and two coats of Mrs. Claus on top of that, and got this: 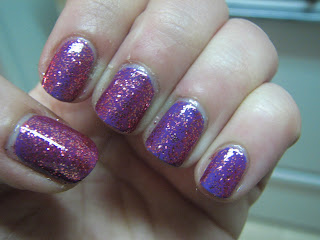 Meh. And what's with the bald spots? Still classifying this as a nail polish fail.
Posted by Lissa at 9:03 PM 4 comments:

Ok, y'all, I just started to paint my nails with China Glaze Mrs. Claus... and I stopped in the middle and removed it all. What a horribly, horribly ugly nail polish. I like red. I like glitter. But that was an abomination. It looked super cheap. Not typical China Glaze quality, and I don't think any number of coats would've made THAT opaque.

I think I finally found something I will not ever be posting on my blog unless I get really, really bored!


In other news, the hubs and I ventured out into the snowy wilds yesterday to get some stuff (mostly beer) at Publix. I got into a conversation with the cashier about nail polish and pointed her to my blog. She was totally one of us. I love meeting people who are as nuts about nail polish as I am. I feel vindicated! So, if you're reading this (and I hope you are!), hi Jessica!
Posted by Lissa at 6:36 PM 11 comments:

We have a winner!

The winner of my blog birthday giveaway is MannaB!

We're having an icky snow/ice event here in Georgia right now, so it may be a few days before I can get to the post office to mail it!

This is the South... what is WITH all the snow lately?!

6" on the first landing of the stairs leading to our apartment: 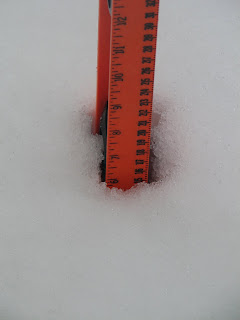 Do your nails match your shoes? 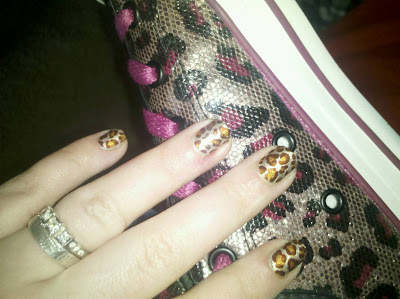 I got some more of the Sally Hansen salon effects... And some sparkly leopard print chuck taylors. So my nails match my shoes!
Published with Blogger-droid v1.6.5
Posted by Lissa at 1:30 PM 6 comments:

1) So, I stand corrected! Those Jesse's Girl nail polishes I mentioned in my last post DO have names. The Charla/Halley's Comet/Catch Me In Your Net dupe is called Glee, and the Scrangie-esque one is called Confetti.

2) That Scrangie-esque polish looks nothing like Scrangie on the nails. It's super sheer -- took four coats -- but flashes between blue, purple, and pink. It's really lovely! Most of the time it looks like a metallic purple with blue shimmer. I apologize for the slew of indoor shots lately, but light sucks when I wake up and sucks when I get home. Maybe I'll get some decent swatching done this weekend. 3) Friday, January 7, my blog will be one year old! I'm still recovering from my Christmas spendstravaganzzzzza, so I don't have much to offer... but anyone who comments on this post by Sunday, January 9 at 9pm can win a bottle of Milani Gems. Yes, I have a spare bottle. And I figured that since it's dupISH to Lippmann Happy Birthday (which I do not even have ONE bottle of), it'd be appropriate to give it away for my blog birthday weekend. :) I may or may not add more stuff to the package. My last giveaway, with the flakies, ended up being quite large... :)

So anyway... comment with your email addy starting NOW! HAPPY BLOG BIRTHDAY TO ME!
Posted by Lissa at 8:57 PM 24 comments:

So, I saw these new Jesse's Girl polishes at Rite Aid, and they were BOGO 50%, so I grabbed two. These polishes don't have names!! DRIVES ME NUTS!

Anyway, I grabbed one that I suspected was yet another Zoya Charla dupe, and another that was Scrangie-esque.

What do you know... we have YET ANOTHER Charla dupe. Really? REALLY?! Isn't this like the fourth iteration of this color in the past year? On the nail.
2 coats of Zoya Charla on index and ring.
2 coats of Jesse's Girl on middle and pinky.
The application on both was exactly the same. They are indistinguishable on the nail. I woke up today and decided that I need to get rid of most of my nail polish collection. It is just taking up space, and the amount of space it takes up is starting to bother me.

I'm going to try to get down to just one drawer full of colors I love. I managed to pare it down to a drawer and a half. I'll keep working on it.

The rest I am blog sale-ing. So I updated my blog sale page. You can get to it here: http://lissasnails.blogspot.com/p/blog-sale.html

Please go buy my stuff. There's some good stuff on there now, and I just need to get rid of some of the clutter in my life. :)
Posted by Lissa at 5:01 PM No comments:

Okay, so I'm HOPING this will be my New Years Eve mani. It perfectly matches a shirt I plan to wear. I just hope this will hold up for four or five days.

I have friends coming in to town to party, starting tomorrow, and tonight was the last night I have to do my nails for New Years!

I'd been wanting to try these out. They are dry nail polish strips, like Incoco. CVS apparently has them BOGO 50% this week, but none of the CVS's in my town have them. I found them at Target, though, and bought the pack that most appealed to me. They retail for $8.99 per pack at Target, which is a little steep. I really wish I'd been able to find them at a CVS because I would have bought a few packs then. SOON. (I hope.)

HOWEVER, I recently cut my nails way, way down due to some nasty peeling I had going on at the tips, and if your nails are short like mine, you can get two nails out of each strip. Providing they fit the curve of your cuticles anyway. :) In the package, you get two sealed packages of 8 strips, and I only had to open one of the packages to do this mani. So, score, I may have enough to do another mani in the future, providing my nails aren't super long.

Another plus is that these come in all sorts of neat patterns and in GLITTER. I know Incoco does this too, but I haven't been able to find any Incoco other than boring reds and pinks in stores.

In the dry nail polish game, Incoco wins for ease of application, but Sally Hansen wins for availability and, uh, interesting-ness.

Anyway, I took this photo with my Droid since I have zero charged batteries for my camera and I just couldn't WAIT to show off. ;) Bottle pics of the retail Essie I picked up.

"Essie" is printed in white on one side of the bottle, with the opposite side being blank. The other two sides have the typical "Essie" embossed on them. There is also now a sticker on the cap with the polish name. I decided to drop in at Sally's today. Since Christmas is over, I knew they'd have clearance stuff back out. I also had a $5 coupon (for renewing my Sally card) and a 15% off coupon. They ALSO are running a 3-day special where all clearanced items are an extra 50% off.

Here are some OPIs my sister-in-law gave me. She's fantastic!
I'm pretty sure all of these were two coats.

Soho Nice to Meet You: Apple Of My Eye: I Don't Do Dishes: Nomad's Dream (which was much more opaque than I was expecting!): And here's a picture of my kitten, just for some extra "aww!" factor: 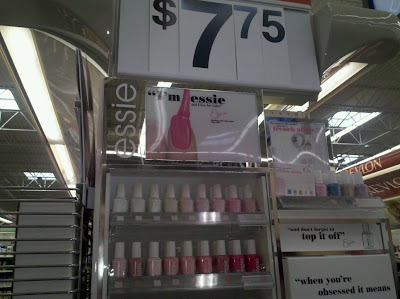 We have a winnah!

Y'all, my giveaway ends at midnight! You have an hour and 45 minutes to enter! Go here if you haven't already! I'm going to work on my spreadsheet of entries and if I'm still up at midnight (I probably will be), I'll pick a winner and email them then. I added SEVERAL items to this giveaway. A couple of them I've mentioned here, but several will be surprises. Flakies and surprises! Merry Christmas! The package is all wrapped up and ready to go. :)

Now on to the polishes!


First up is Purple X-ing. Gah... I kept reading about this color on other blogs. I'm not sure why it took me so long to pick it up.

The texture wasn't so great. A little thick and lumpy. Grainy on the nails. But purple! With holo glitter in it! The color is fabulous!

I think this was two coats, but I probably should've used three. Then I also got Mossy Britches. I'm sure I used two coats for this. This is another fabulous color! And now for your standard ending...